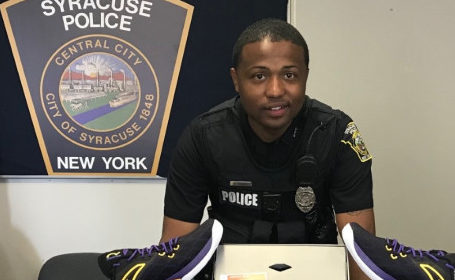 The Syracuse Police Department is facing legal action from a Black employee over their treatment of Black police officers. Multiple news outlets reported last week that Syracuse and its police department, who Hanks claims cultivates a “Jim Crow culture,” have been sued for discrimination.

Hanks says the department denied him a position on the gang violence task force because they believe he is a “gang member” that traffics drugs and “has have known associations with gangs and convicted criminals”. He claimed the department had relied too heavily on his past music taste to back up their assertions about his gang affiliation, pointing out an internal memo by Capt. Timothy Gay that mentioned his past references to Tupac lyric.

In describing the claim, Hanks called it an “ultimate violation”. “I don’t care about the stuff in the memo, but what about the officers who haven’t mentioned anything to me about it?” These are the people who make me scared,” he said. “I don’t know whether I can trust these people. Will they have my back?”

There is no doubt that this is a clear example of racism, and of discrimination. Throughout his tenure at the department, he has observed many instances similar to this, and this needs to stop,” he continued.

Hanks’ lawsuit alleges that the department has cultivated an environment that promotes racial harassment and racial stereotypes — all of which he hopes to combat through the suit. He reportedly wants $33 million in damages in addition to better opportunities for Black cops for employment and training.

The official video for Kali’s “MMM MMM” has been released

One of the biggest cannabis companies in the U.S. is headed by the first black CEO of Jay-Z’s The Parent Company