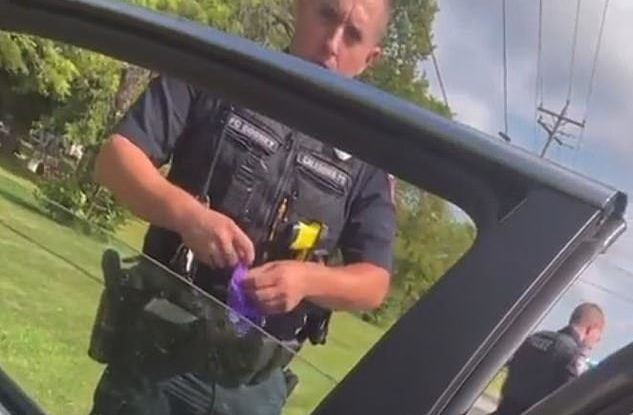 In a viral video posted online Saturday (July 24), a police officer in Wisconsin appears to throw a plastic bag containing drugs into the backseat of a Black person’s car. Despite this, the 14-second clip only captures a small portion of what actually took place.

One of the Black men in the video asks a white police officer in the Village of Caledonia, “what’s that?”? What exactly did you just throw in here? “I’ve got you caught on camera,” says the passenger. “You’re on camera. We’re all good.” says the officer.

After that, the camera pans to the rear seat showing the plastic bag that the officer threw into the car. A local rapper named Trenchkid Savoo claims to be the man in the video. When asked repeatedly, the passenger replies, “Hey bro, just threw that in here.”. The situation was further explained by him via Twitter.

For the first time, I witnessed a cop trying to make a case against me just to search my car. He doesn’t even know I’m recording. He looked nervous in his tweet. During a second clip, Trenchkid Savoo says he’s all right and he’s not in jail. In addition to contacting some lawyers, he expresses his intention to take legal action.

In response, Caledonia Police Department released a statement on Facebook. In response to the incident, the department is planning to conduct an “in-depth internal review”. According to the statement, “all officers assigned to patrol duties wear body cameras, and preliminary information indicates that all of the officers at the scene had their cameras turned on,” the statement read. “We also have dashboard mounted cameras in all marked police patrol vehicles in Caledonia.”. In connection with the internal investigation, we will review the videos. It will also be necessary to gather information from all the officers who attended.”

Remember that the cell phone video is only a small part of the entire encounter; however, all available video might provide a more comprehensive view,” the department added.

Taking a look at the body cam footage, Village of Caledonia Police Chief Christopher Botsch posted a Facebook response to the viral incident. A vehicle was stopped on the interstate because its driver was traveling at 63 mph in a 45 mph zone, according to Botsch. Before the video began, the driver and passengers near the back were removed by police. During the search, the officers found a plastic baggie that had been torn at the corner. Botsch says that the corner tear in the video didn’t contain illegal substances. It is common for illegal drugs to be packaged in this fashion, he wrote.

“The empty corner tear was turned over by the searching officer to another officer who was on scene. That officer turned it over to the officer who is seen on video. Since there were no drugs in the corner tear, the officers discarded the empty packaging material in the vehicle. This is what was observed in the video.” The police department plans to continue its investigation into the matter. All videos related to the traffic stop will be released in the near future.