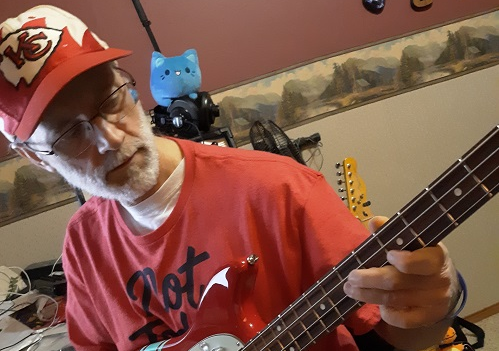 Literally, Erick Duran Manard is a one-man band. Since he doesn’t tour, he is a composer and studio artist. Since he cannot play all instruments at the same time, and he can’t afford to hire musicians at these prices, he doesn’t play his music live. Besides, he doesn’t want to tour or comply with the demands of a record label at this point in his life. His experience has been that record labels can be really hard to deal with, and that management may not always be following your best interests.

Rock is what he does, specifically ‘Eclectic Indie-Prog Rock.’ It makes sense to him that he names himself after the genre he plays, but he also has an appropriate nickname: “Shamrocker.”

When he was a kid, he was surrounded by eclectic music, his Dad’s assorted collection of 45s and vinyl LPs, artists ranging from Nazareth to Neil Diamond. His second discovery was Kiss when he was a preteen, along with Mac Davis, Grand Funk, Missing Persons, Pablo Cruise, Joe Tex, Elvis, etc. The whole thing was something he dug up. In his early teenage years, he was mesmerized by the uniqueness and boldness of the debut “Black Sabbath” cassette.  His early 20s were marked by bands like Iron Maiden, Judas Priest, Megadeth, AC/DC, Testament, Helloween, and Fates Warning. As a result, he was selfish, conceited, and overly obsessed with the “crunch” while disregarding melody and nuance. When he was a kid, he thought that more is better, but in his younger years he played like it was the other way around. It’s an extremely constrictive and counterproductive view of music. He has been able to expand his musical tastes as he has aged. A great deal of music appeals to him at once.

S.A. JOE LUCERO’S ON A ROLL

MINO CHELLY HAS AN INTERESTING STORY