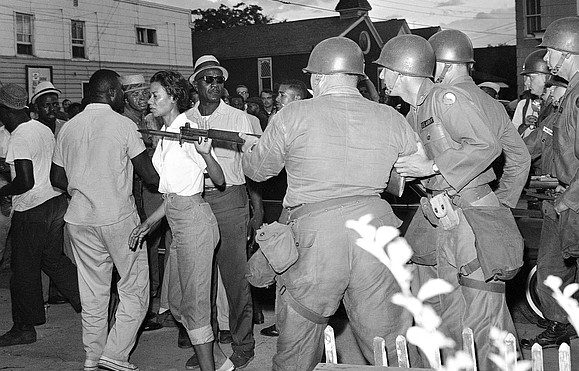 Gloria Richardson, a civil rights activist and organizer, has died. She helped lead and organize the Cambridge Movement on Maryland’s Eastern Shore. She was 99 years old.

Tya Young, Richardson’s granddaughter, told The Associated Press that her grandmother passed away in her sleep Thursday (July 15). In her interview with AP, Young revealed that her grandmother was an unsung civil rights hero. Young said she did what she did because it had to be done and she was naturally a leader.

During the civil rights movement, Richardson was a notable figure. Richardson, who was focused on desegregating Maryland’s Eastern Shore while others concentrated their efforts in the Deep South. A member of the Cambridge Nonviolent Action Committee (CNAC) during the 1960s, she was actively involved in the Cambridge Moment.

As a result of this movement, all Maryland public areas, including schools, sport facilities, movie theaters, hospitals, and other public spaces are expected to be desegregated. In 1997, Richardson recalled Cambridge as having the following limitations: “You could go to restaurants and place food orders, but you couldn’t eat there.”

The Washington Post reports that Ms. Richardson held rallies against racial segregation and worked for economic justice for Cambridge’s Black residents for nearly three years. Standing in front of armed National Guardsmen, she protested against segregation. In addition to being outspoken in his support for equality, he had an effect on the civil rights movement’s tone. Younger activists would go on to campaign against racial inequality and further Black power causes in the 1960s and 1970s.

A treaty known as the “Treaty of Cambridge” would be signed between CNAC and the Kennedy administration. Unfortunately, the local government in the city didn’t keep the promise. Although she signed the treaty, Richardson refused to halt the demonstrations around town. The Civil Rights Act of 1964 was a monumental act that ultimately led to the desegregation of local schools.

As author Joseph R. Fitzgerald, who wrote a biography on Richardson titled “The Struggle is Eternal: Gloria Richardson and Black Liberation,” explained to AP, “the Cambridge Movement was where Richardson planted the seeds of Black power and nurtured its emergence.”

It’s hard to believe that she only spent three years as a leader, but she was literally at the forefront of a high-stakes campaign for Black liberation, and she’s being threatened,” Fitzgerald said. Her life is threatened by white supremacist terrorists who are calling her house and threatening to shoot her.”

Richardson resigned from the CNAC during the summer of 1964. After moving to New York, she went to work at the National Council for Negro Women. It is presumed that she is survived by daughters Tamara Richardson and Donna Orange, as well as granddaughters Tya Young and Michelle Price.